The AWI Museum—which was entirely redesigned and reorganised in 2012—invites visitors to discover the Arab world from a different perspective and goes beyond stereotypes, by presenting all the diversity of its cultures, ethnicities, languages, and confessions, from its origins to the present day.

As visitors enter the Museum, an installation of sounds and images projected onto mirrors immerses them in the heart of a plural and multiform Arab world. 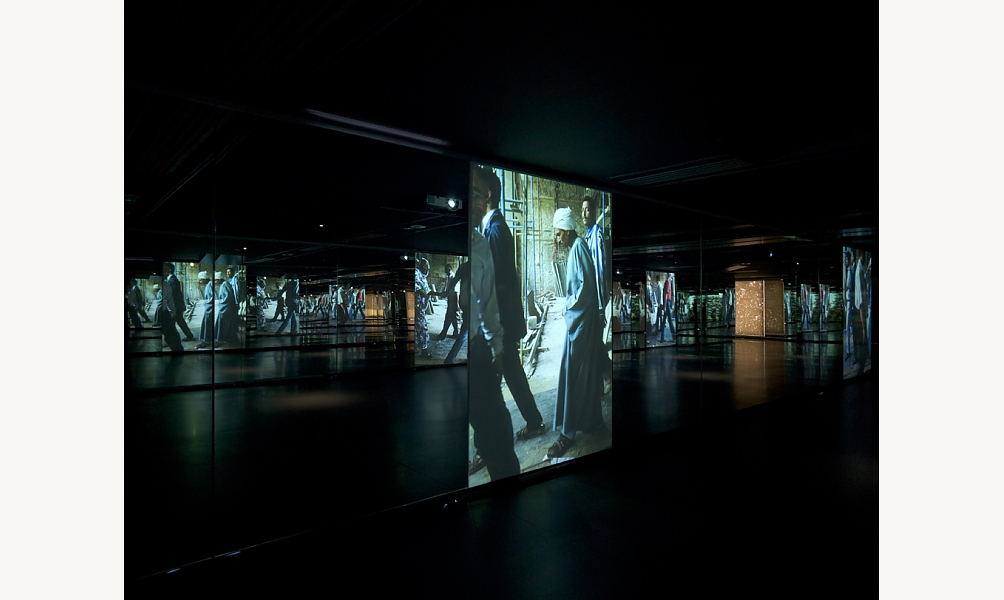 The museography promotes a dialogue between works and objects belonging to fields that are rarely associated:

The itinerary extends over four floors of the building, from the 7th to the 4th floor, and is based on five themes:


Arabian identity, in the cultural sense of the term, is an example of subtle combinations of and interactions between cultures that the traumatisms in the history of the Arabs have obliterated from the collective memory. Georges Corm

1 – The emergence of an identity

The Arabian Peninsula is not only desert, but also a melting pot in which an Arab identity and culture were forged throughout the first millennium BCE. Agriculture and caravan and maritime trade created prosperous kingdoms. Vestiges of sedentary populations and furniture used by nomadic cultures attest to the establishment of an identity that was founded less on ethnicity than language. Visitors can listen to this language, with a declamation of extracts from the Muʿallaqāt—pre-Islamic Arabic poetry that conveys the vision of the world of the Arabs of this period. 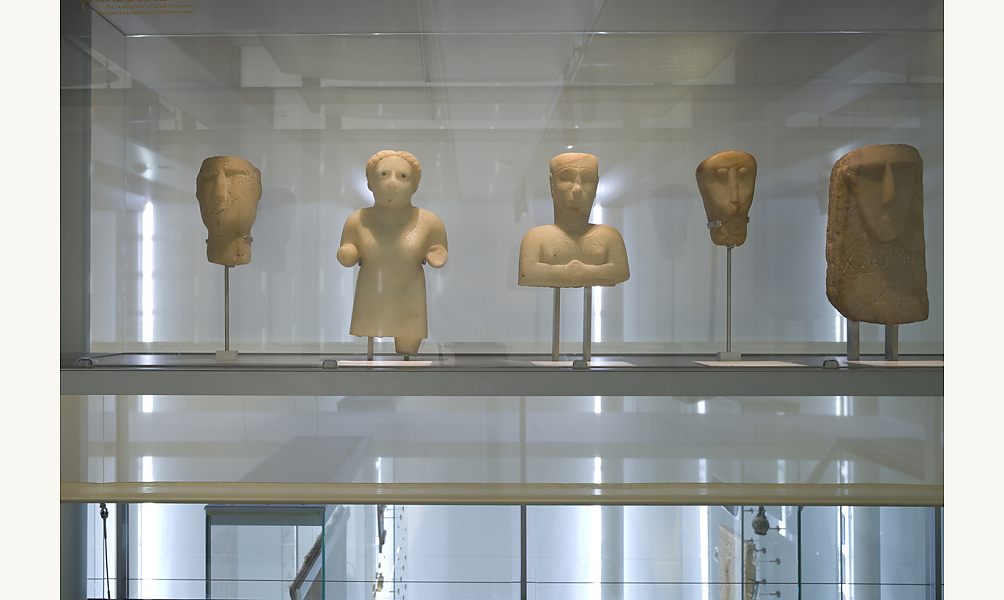 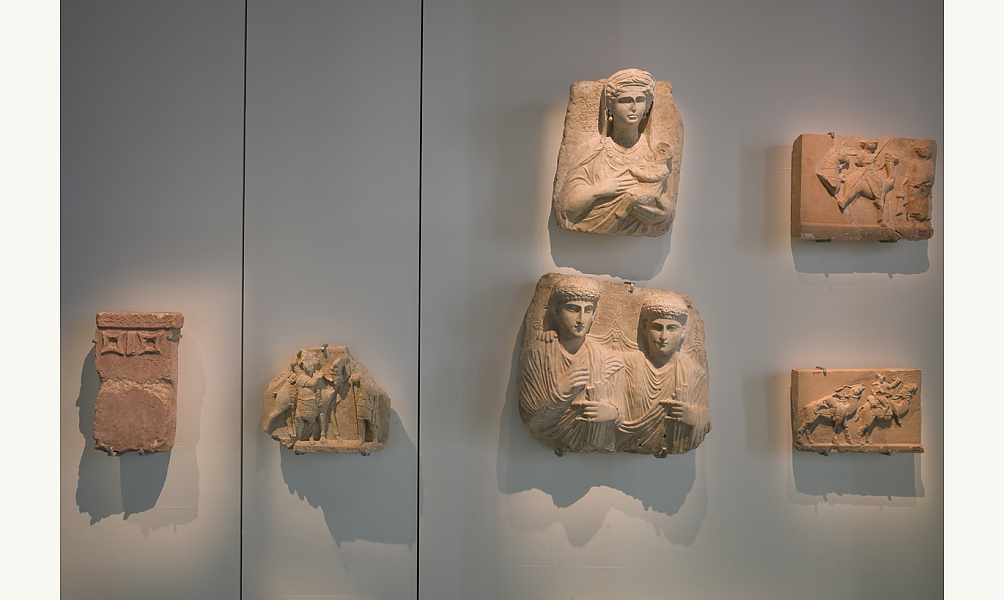 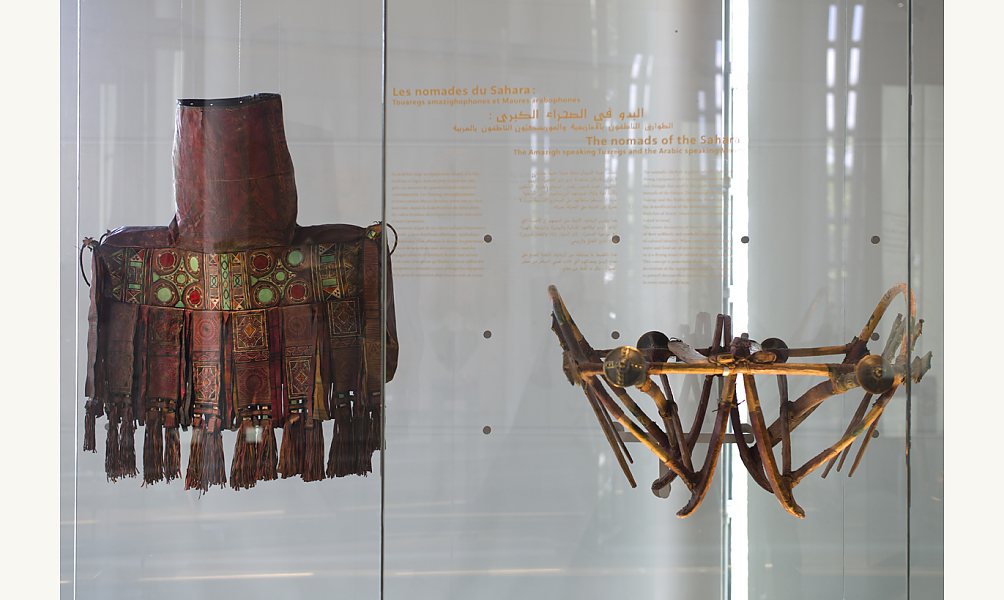 
The Museum is precious because the objects it contains are real, archaeological, historical, indisputable, and irrefutable testimonies. Hence, it frees the presentation of religious practice from all dogmatism and the emotional power of religious communities. Mohammed Arkoun

From earliest antiquity, man attempted to understand the cosmic forces … and reconciled them. How did Mesopotamia and Pharaonic Egypt communicate with the divine? Visitors will discover this through cylinder seals and amulets. Since the fourth millennium BCE, shared precepts and rites also governed the cults: the representation or non-representation of divinities, prayer, symbols of light and eternal life, offerings, and sacrifices, and pilgrimages generating the production of statues, icons, furnishings, and objects of faith. A Torah, a Bible, and a Qurʾān attest to the three monotheistic Abrahamic scriptures and underline the fact that the belief in one God emerged in the region that is now part of the Arab world. 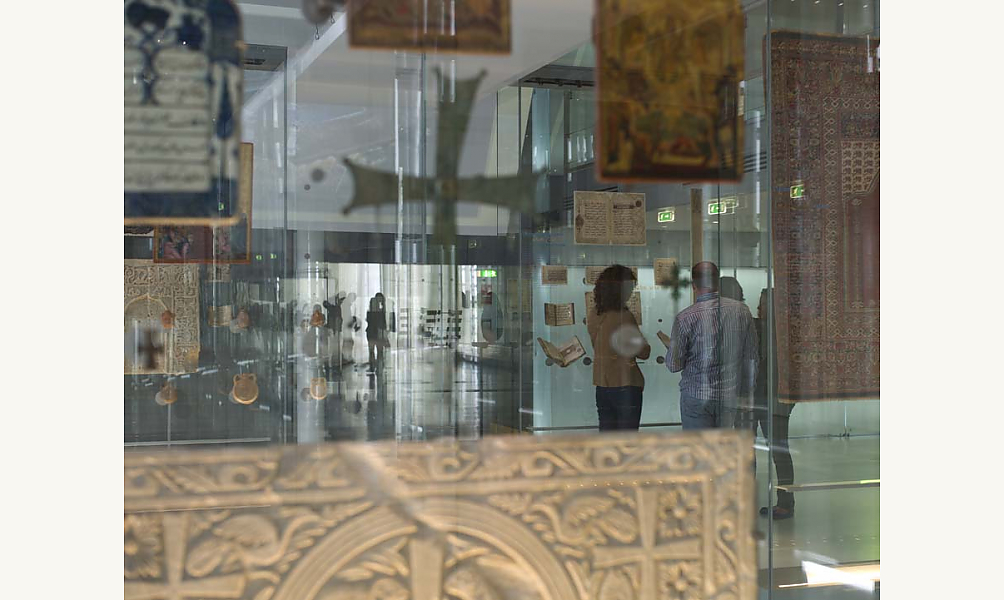 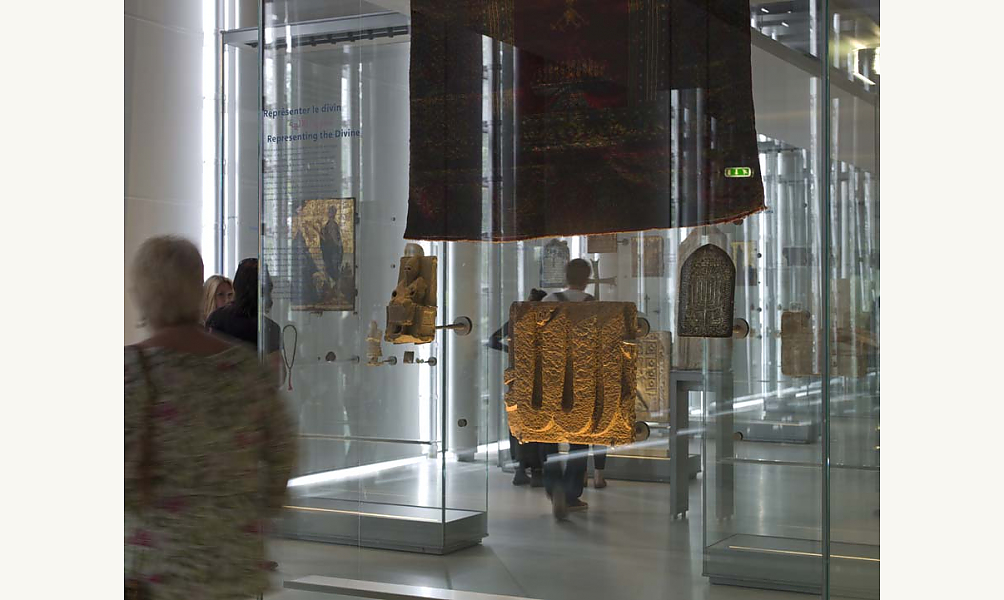 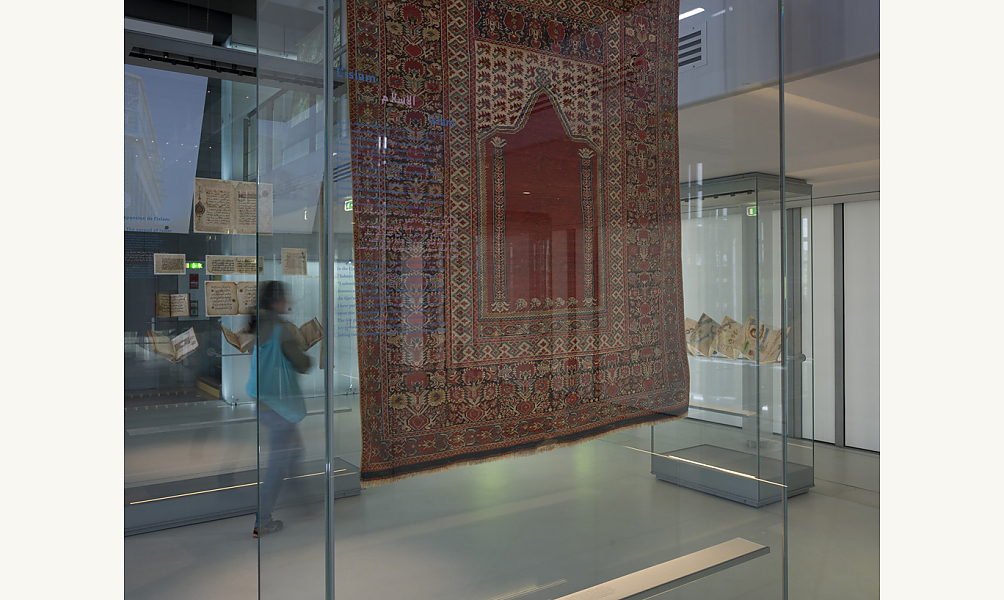 
All the prosperity, all the quintessence of culture, and all the artistic perfections, which the city has strived so hard to create, remain concealed. The city only truly reveals itself in the commercial areas, the labyrinthine souks where the traders display their products, and where the artisans are busy crafting objects. Mohamed Métalsi

3 - Strolling through an Arab town

Al-Madīna (‘the town’ in Arabic) is an embodiment of the organisation of Muslim society. From the Maghreb to the Mashriq, the same emblematic monuments are found in different forms and styles: the palace was a centre of power and promoted the arts, defining the specific aesthetics of each dynasty or era; the mosque was linked to the palace, while churches and synagogues catered for the other confessions. By the eleventh century, there were also madrasahs, where the theoretical and practical knowledge was developed and transmitted. And, of course, there were souks—centres for trade (including long-distance trade) and the production of materials, which employed certain scientifically based processes. Lastly, the town is composed of family dwellings, which contain communal and private areas. The museography—with its many display cases that present the latest discoveries on the excellence of the intellectual works and artistic accomplishments—is inspired by the urban planning of Arab towns. 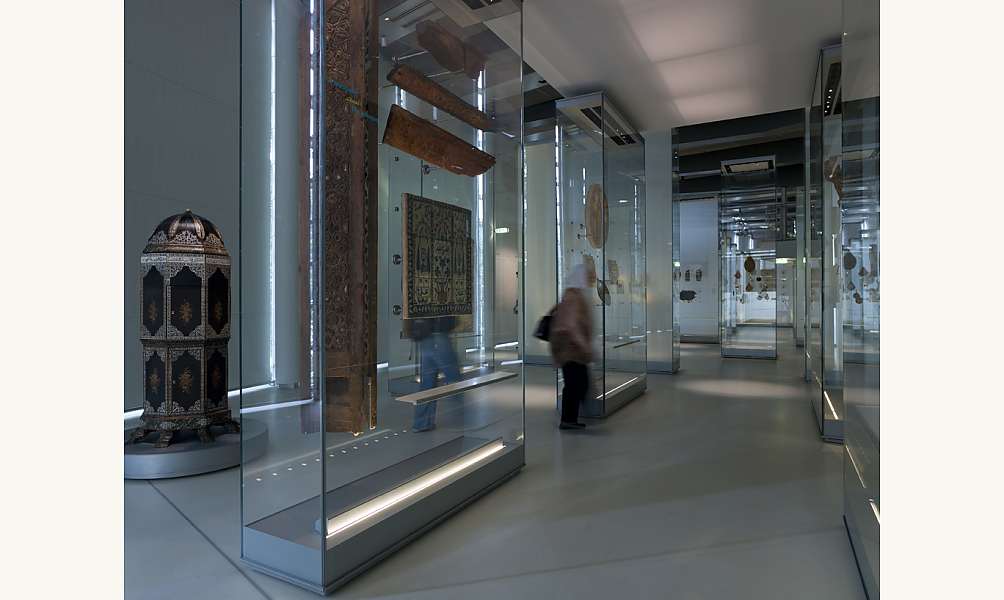 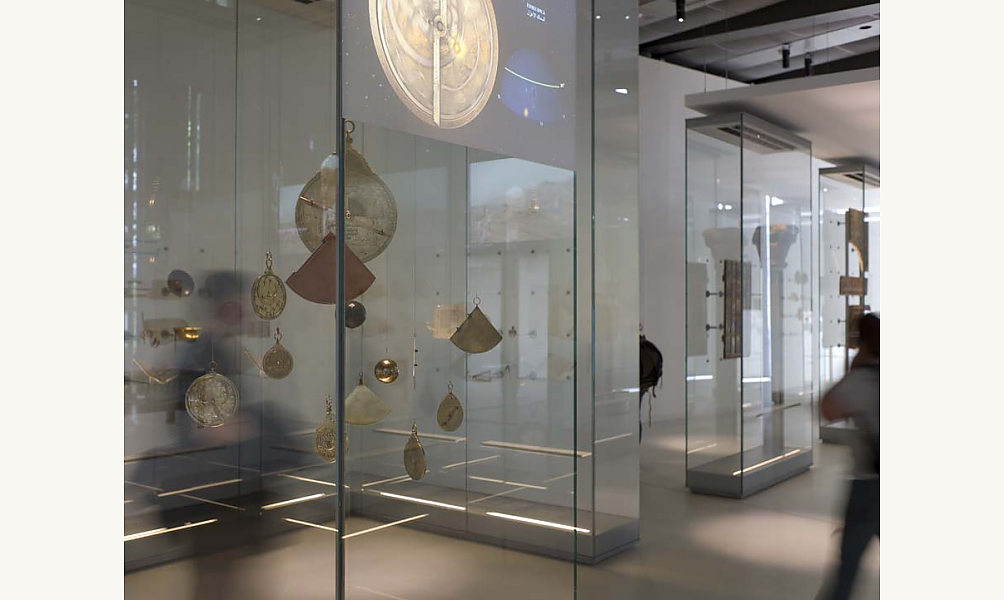 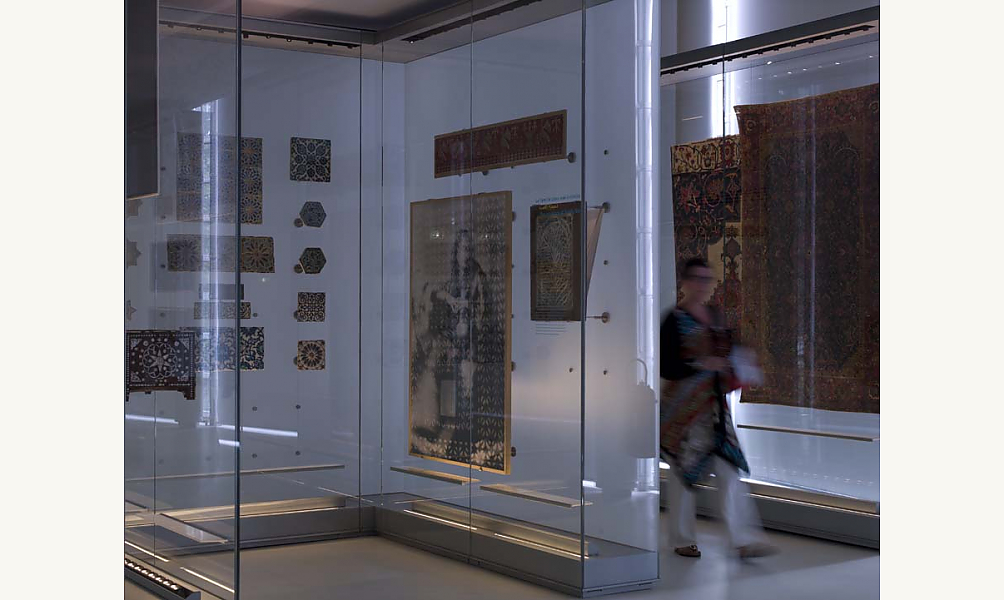 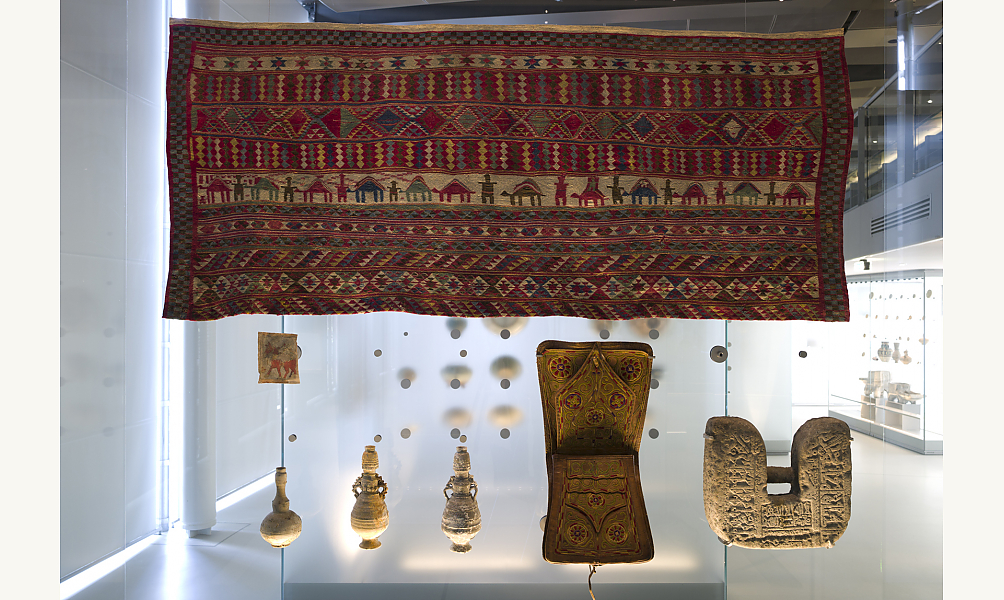 
The approach to Beauty, as developed by the ‘’Arab world’’, cannot be confined to the definition of a formal canon, the development of an aesthetic philosophy, or a purpose that transcends the divine. Beauty is closely linked to Knowledge. It is a gateway to knowledge, whether spiritual or otherwise. Yves Porter

In the ‘Islamic Arts’—a concept created by the West—there is no equivalent to the Western theorisation of the quest for beauty. The only exception is calligraphy, which became an aesthetic form in its own right, justified by the act of piety constituted by copying the word of God, the Qurʾān, in harmonious scripts. Over the centuries, a whole series of prescriptive treatises specified how texts and inscriptions—which were both religious and secular—were to be written in fine letters, in every format and on all supports. Artists and artisans—there was no distinction between them until the twentieth century—invited anyone and everyone to enjoy a sensorial experience of beauty by creating, whatever the object and its utility, spaces that combined materials, motifs, colours, proportion, and harmony. When it came to the beauties of Creation (Islam only forbids the representation of living beings in religious edifices and their furnishings), flora, fauna, and men and women, and also the marvellous and the fantastical, were treated in an idealising and expressive rather than naturalist manner. 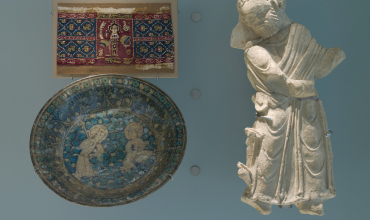 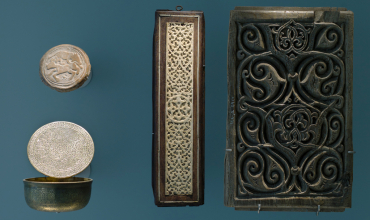 
For more than a thousand years, the ‘’Arab world” has been modelled by Islam and the norms it has promoted; even non-Muslims have been influenced by its thought processes. Hence, in the Western world the body is the property of the legal subject, but Islam it is the property of God. Men are required to treat their bodies in the same way as anything that has been entrusted to their care. They must satisfy the body’s needs without being enslaved by it. Mohammed Hocine Benkheira

The last stage of the itinerary focuses on the relation each person has with their body and with others. The first display case deals with the question of the Muslim veil, which does not have religious connotations, as is all too often claimed in current debates on the issue. Taking care of the body—‘a loan from God’ in the Muslim tradition—involves observing personal hygiene to stay in good health, and purification for believers. An installation displays the objects and products used in the baths with a variety of sounds that evoke the various stages and the social dimension. Hospitality has been—and continues to be—practised and consistently held in the highest estimation in Arab societies. It is part of a code of honour and relates to familial and religious solidarity. The pieces displayed on the feast table attest to the fact that sharing meals is the most obvious expression of hospitality. Hospitality also involves entertaining guests with poetry and music, the veritable pillars of pre-Islamic culture. Hence, the Museum’s itinerary ends with an introduction to erudite and popular Arab music. 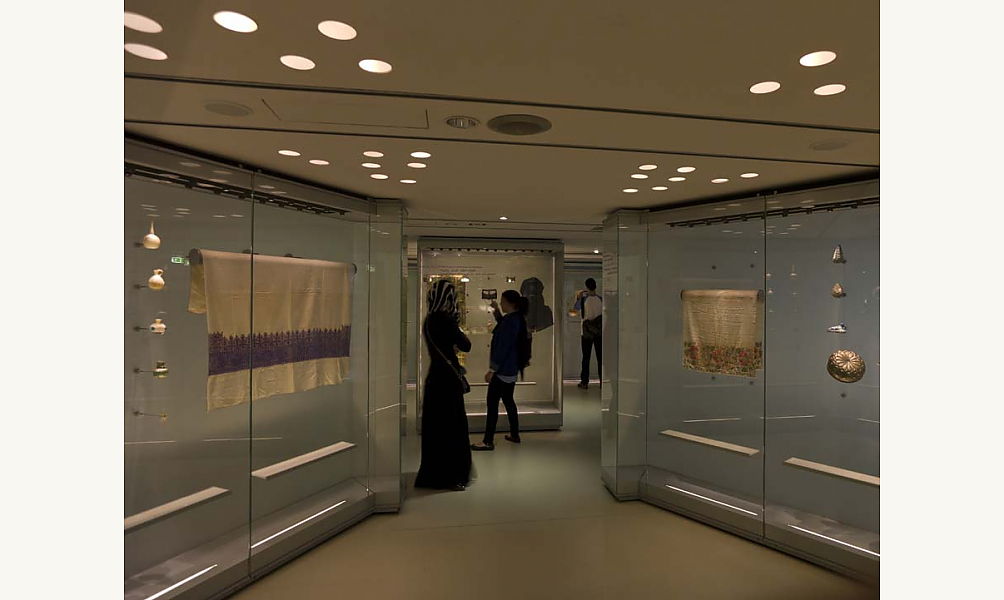 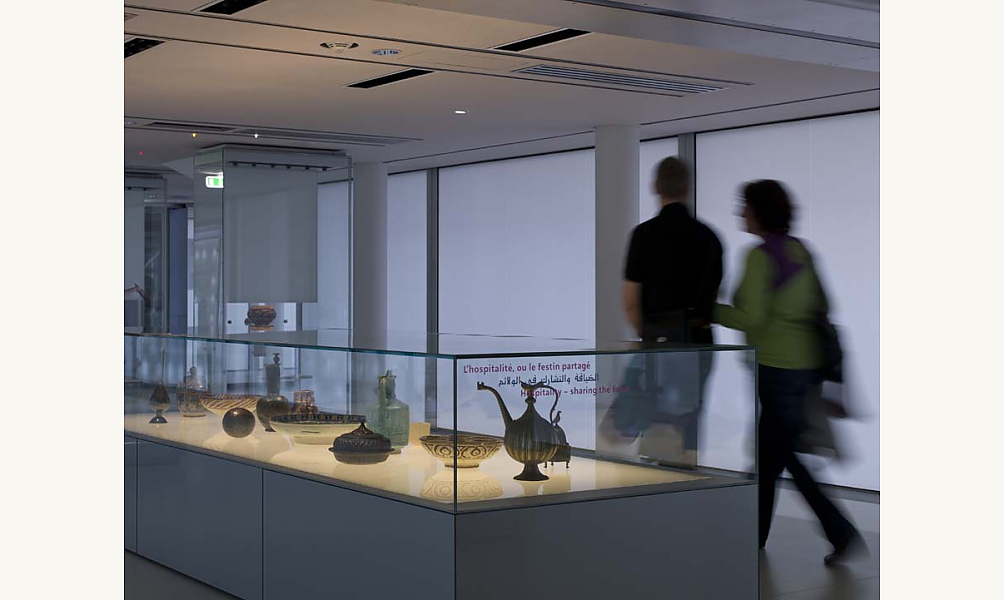 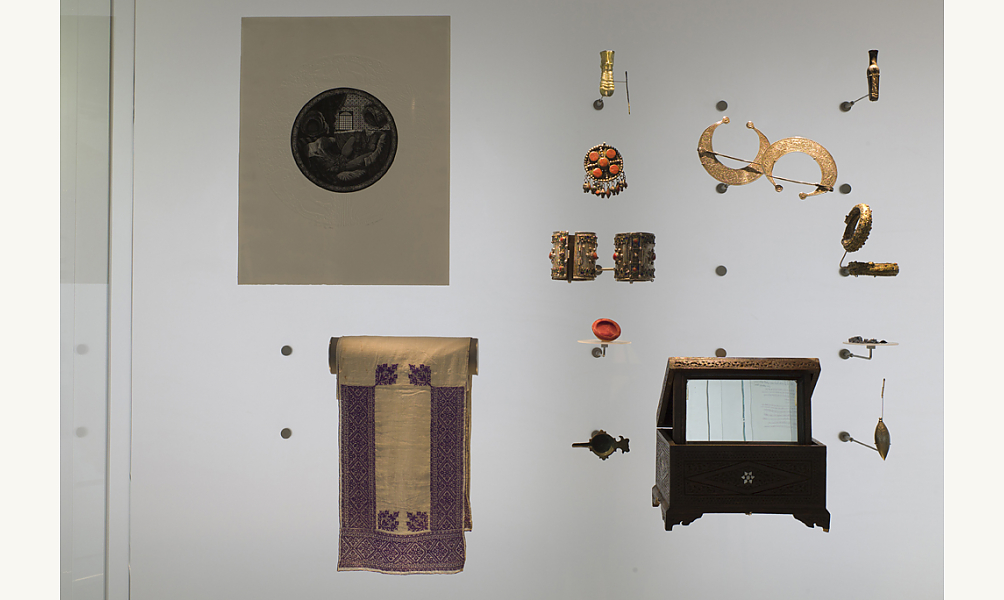 IMA
The AWI Museum in video
For further