I like intelligent and well-defined architecture. I see it as an expression of know-how, and a reflection of esthetic and practical considerations. I judge it based on the extent to which it achieves an economic and cultural consensus. Jean Nouvel

Erected by the Seine river as a modern architectural symbol of dialogue between Western culture and the Arab world, the Arab World Institute was publicly inaugurated in December 1987. The building was designed and executed by a team of architects including Jean Nouvel, Architecture Studio (Martin Robain, Rodo Tisnado, Jean-François Bonne, Jean-François Galmiche), Gilbert Lèzenes, and Pierre Soria. It is an integral part of the Parisian urban landscape, as it echoes the design of the nearby University of Jussieu buildings while clearly standing apart with its mashrabiyas.

An exceptional setting at the heart of the Latin Quarter

Owing to its architectural quality and the richness of its interiors, the Arab World Institute is one of the most prestigious Parisian monuments. Its construction was jointly funded by the Arab States and France as early as 1980. Halfway between the University of Jussieu and the banks of the Seine river, AWI was built on a historical site where the Saint-Bernard gate, the Saint-Victor Abbey, and the Paris wine market (Halle aux vins) once stood, at the heart of the Latin Quarter.

Facing the Saint-Louis Island, offering stunning views of Paris and the Notre-Dame cathedral, the building reveals its curves made of glass and steel along the Seine river while its geometrical perfection can be seen from the University of Jussieu (south façade side). The design of the building combines open and sheltered spaces, formal rigor, and diversity. It harmoniously blends, inwardly as well as outwardly, the luminosity of materials with various monochromatic shades of grey. 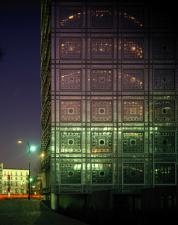 White, grey, and smooth, playing with the transparency of the structure, this is how the interior design incarnates the very concept of the institution. It revolves around symbolism shedding light on AWI’s main purpose and objectives:

The North and South façades

The North façade is a curtain-wall made of aluminum and glass that serves as an interface with the historic neighborhoods of Paris. Its horizontal pattern is reminiscent of old building brick layers whose screen printed reflections look like they were inserted inside the glass at the top of the façade.

In June 2014, French-Tunisian artist eL seeD painted a gigantic mural on one portion of the façade.

The South façade sports traditional patterns of Arab geometry with its 240 mashrabiyas. Both industrial and ornamental, more of a screen and less of a wall, mashrabiyas are as delicate as clockwork, and as sophisticated as a mosaic. Photoelectric cells and mobile apertures allow for natural light control based on the amount of sunshine. The mechanism is set to perform a maximum of 18 movements a day. 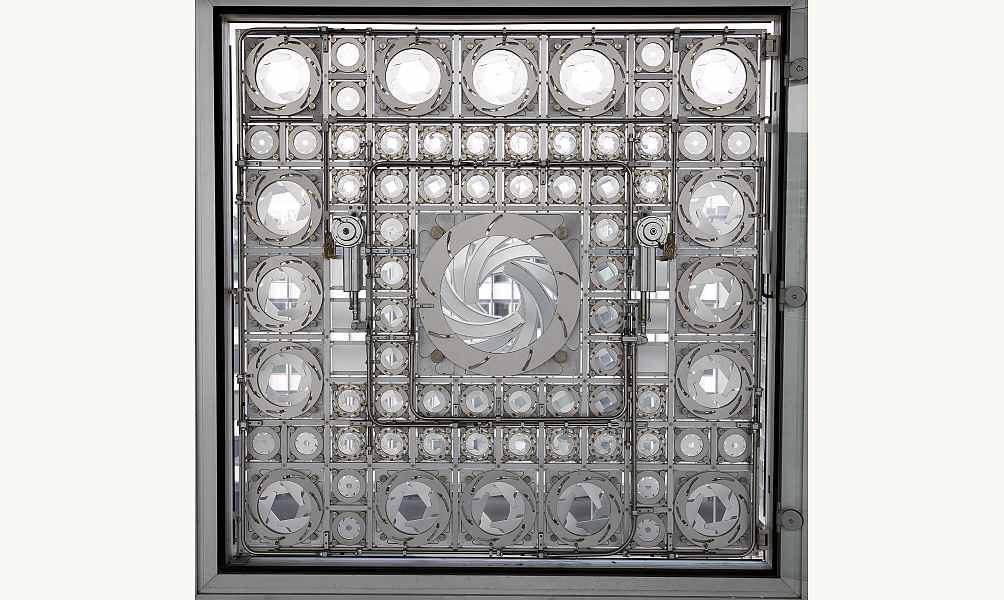 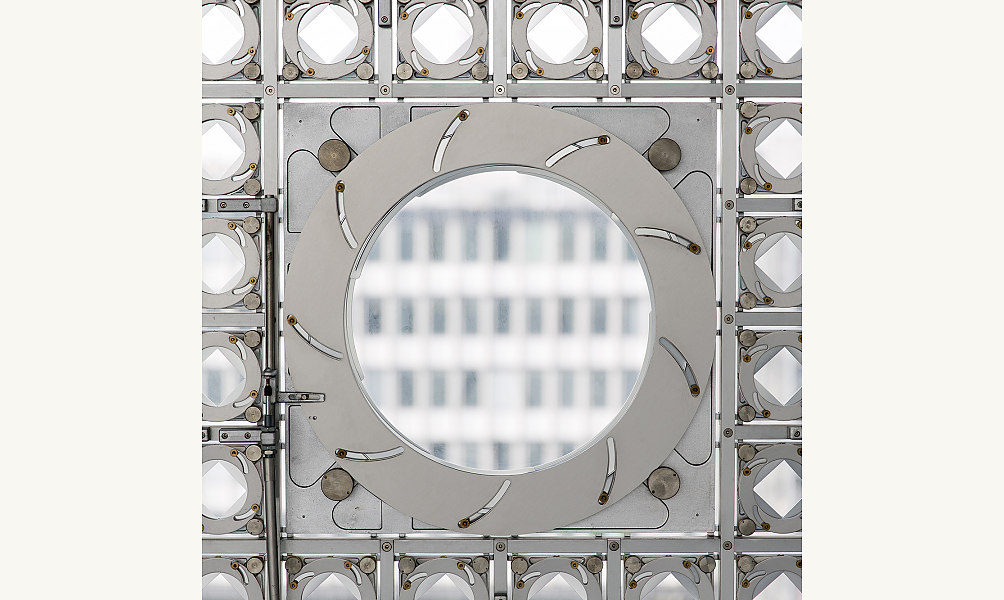 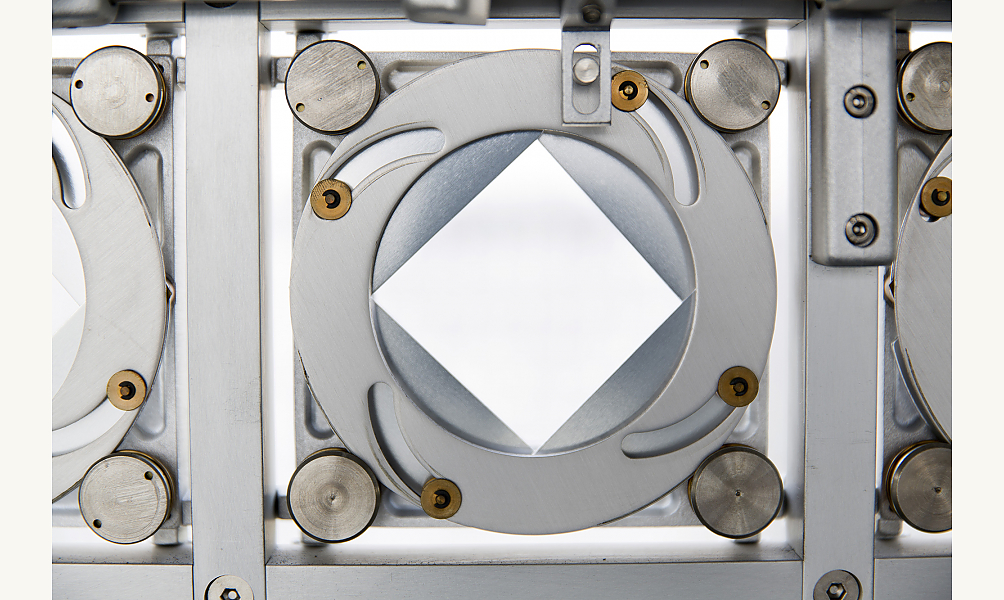 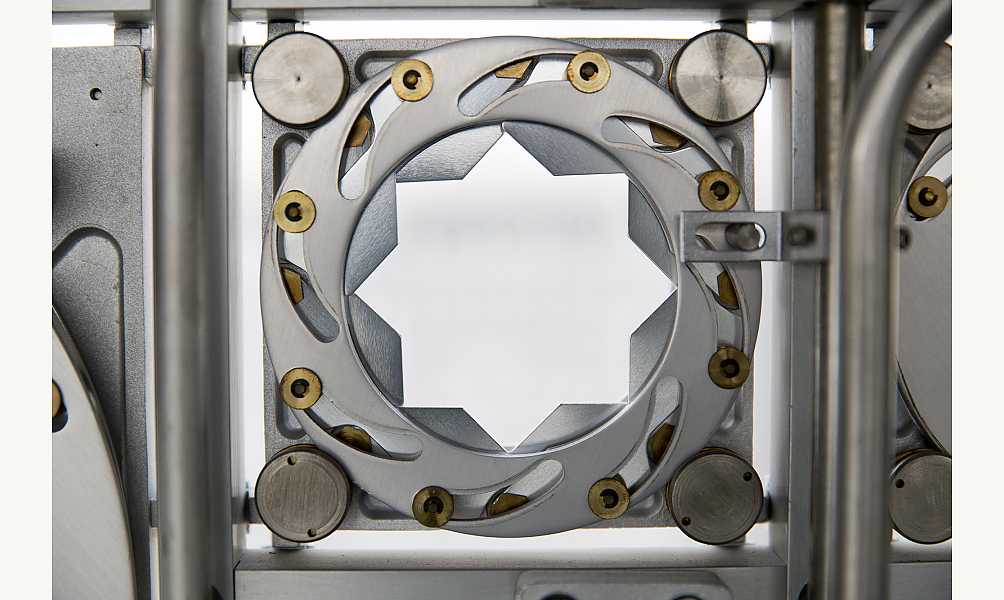 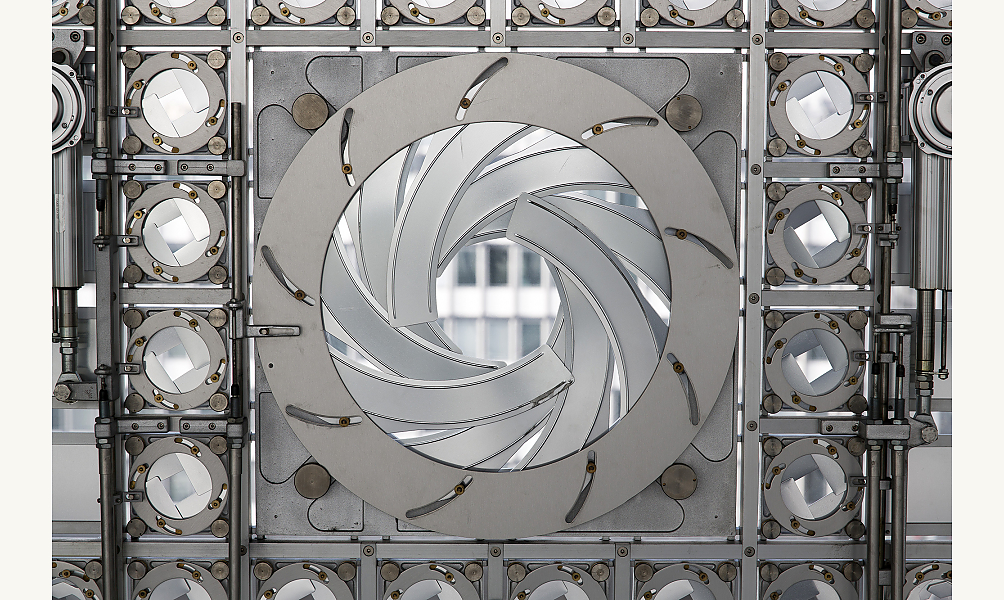 Thirty years after its inauguration, the building of the Arab World Institute requires a full renovation. It became important to restore its inner and outer shine while adapting it to the new dimension the institution has taken on after years of constant growth.

IMA’s building renovation project involves most of its spaces:

A new exhibition room next to the auditorium with direct access from the hypostyle hall. This will add 500 sq. meters to the current exhibition space. It will be particularly fitted for the photography and visual arts exhibitions of contemporary Arab artists.

A new educational center near the new exhibition room. Part of this new center will be dedicated to Arab language courses. It will include 6 new classrooms with lots of natural light, and state-of-the-art technology. Those are meant to better serve IMA’s 2,000 students each year, and address the growing demand for more capacity.

The rest of the new educational center will be dedicated to the younger audiences, with some new rooms designed specifically for children workshops.

Finally, several conference and seminar rooms will be created next to the auditorium for AWI’s partners, and potential private sector renters to use. These new rooms are both an answer to the recurrent requests that AWI had been unable to meet thus far, and a way to increase its own resources.

The DVVD firm, headed by Daniel Vaniche, is in charge of this great project, in collaboration with the founding architects of the building.

AWI is currently working to secure funding to complete the project. Construction work might continue up to 2019, but no significant interference with AWI’s functioning is to be expected. 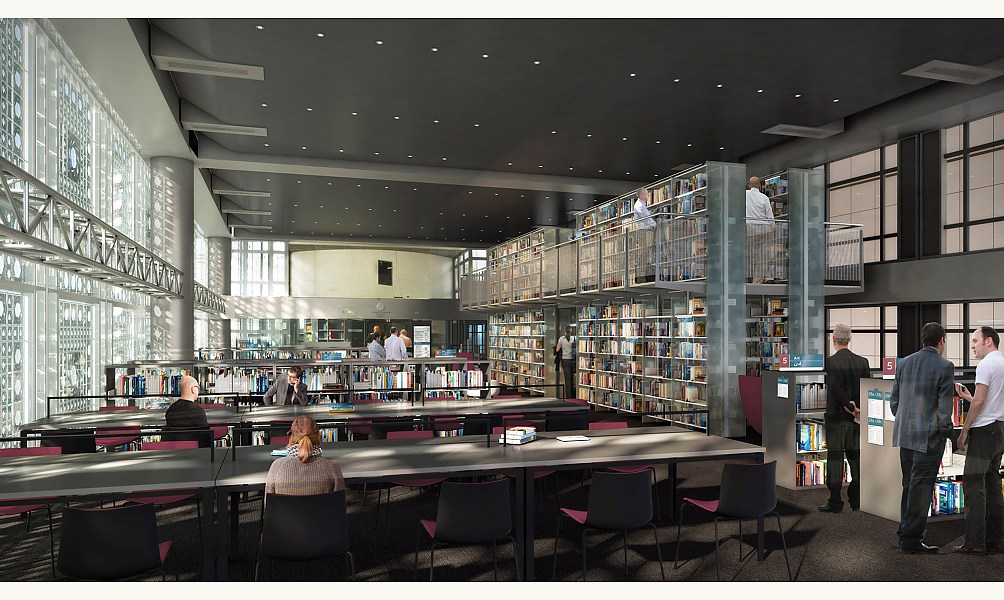 Panoramic view from the rooftop and High Council Room

On the 9th floor, the top floor of AWI’s building, the rooftop terrace offers some remarkable panoramic views of the most noteworthy monuments of Paris, including Notre-Dame as it appears to be embraced by the Seine.

On the same floor lie the transparent walls of the High Council Room and its smoking room.

Resembling a giant ring, it is the only part of the building where transparency is almost absolute. It is a stately room, halfway between heaven and earth, that embarks you on a journey. “A single parallelepiped,” Jean Nouvel says, “can vehiculate various sensations.” The building fades to better show a panoramic view of Paris. With its glass walls towards the East side, the smoking room overlooks the grandiose simplicity of the High Council Room. On the West side, the views of Notre-Dame and the Seine river are breathtaking. To the North, the rive droite reveals itself behind the tip of the rooftop terrace which sits on top of the building’s opposite wing. On the South side, the openwork mashrabiya wall covers the building like a sumptuous star-spangled carpet.

This space was initially meant for the annual meetings of Arab countries’ representatives as they discussed the year past, and planned for the following year. Today, the room welcomes the AWI Thursdays, and can be booked for private events as well. 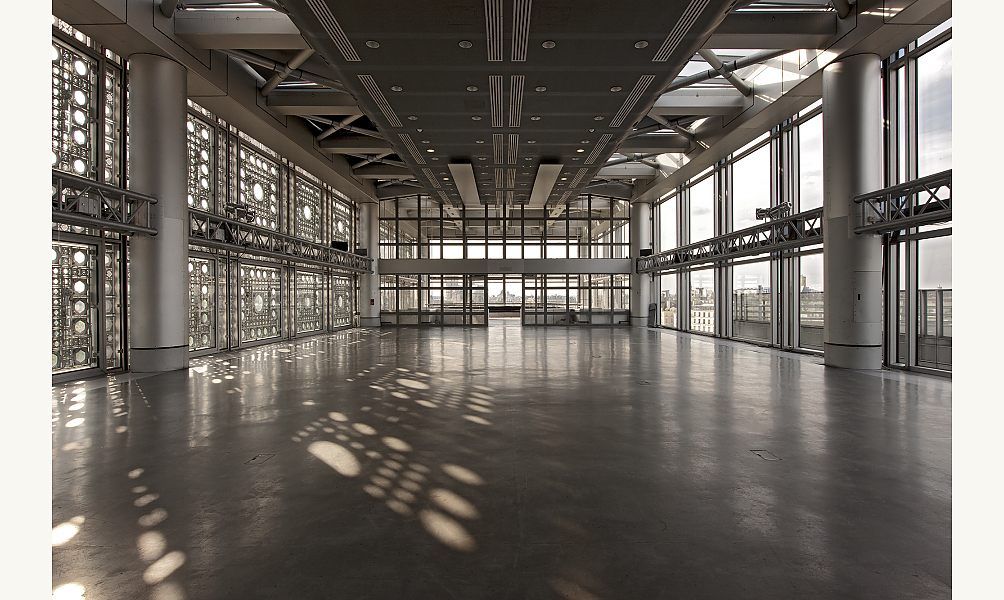 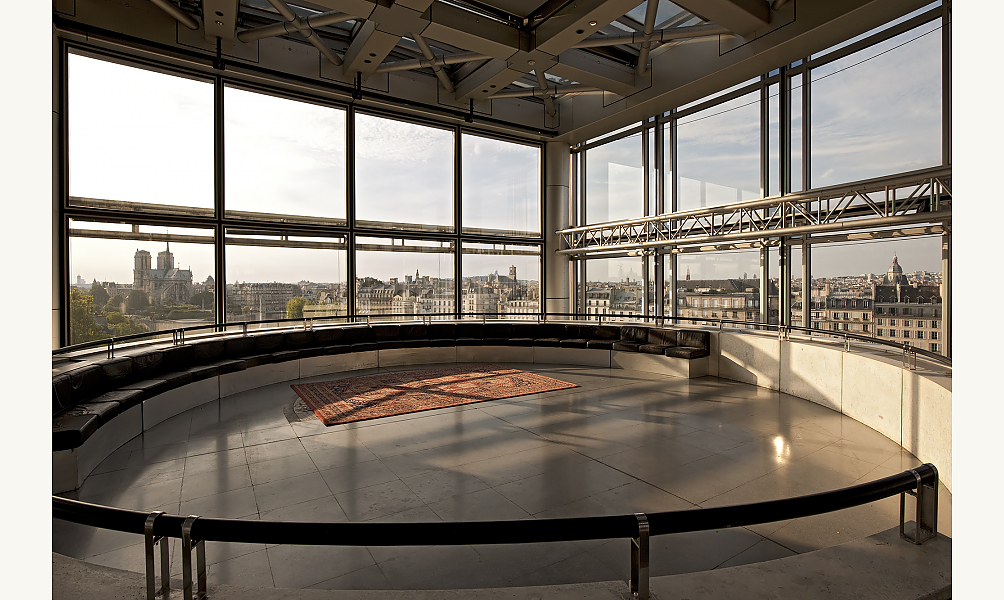 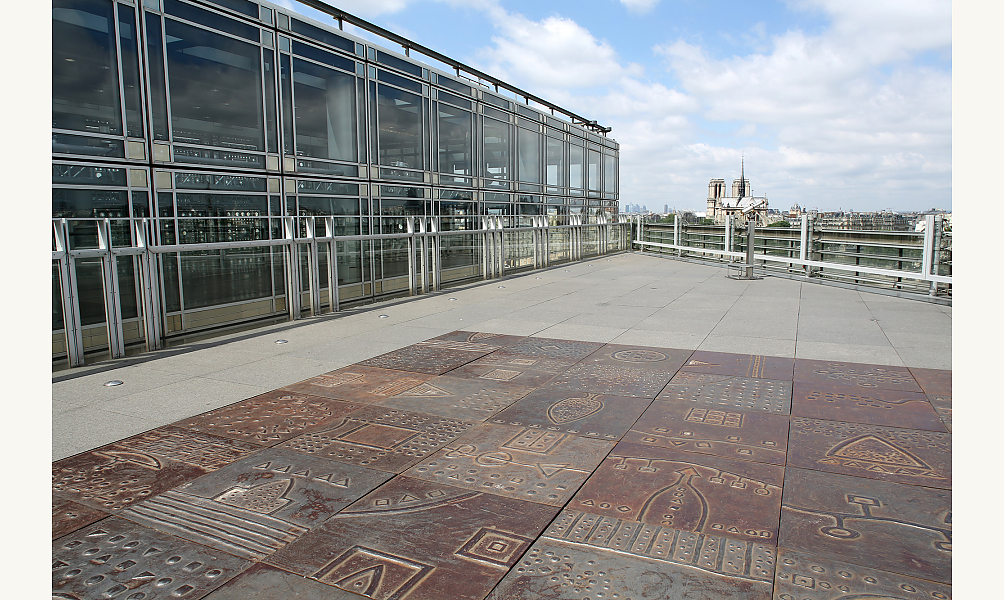 The Library and its book tower:

The library spans across three floors connected through the book tower, which spirals up and offers beautiful views of the urban landscape, including the Seine river, Notre-Dame, and the Boulevard Saint-Germain. It springs from the ground in a glass case which culminates in the most spectacular of IMA’s rooms, the High Council Room, and its panoramic views of the city.

The upward ramp of the book tower is reminiscent of the Great Mosque of Samarra’s minaret. As with all other nods to Arab iconography, Jean Nouvel transcended the minaret to only retain its most abstract essence.

In the context of its renovation, the library will soon unveil its new setting and collections. 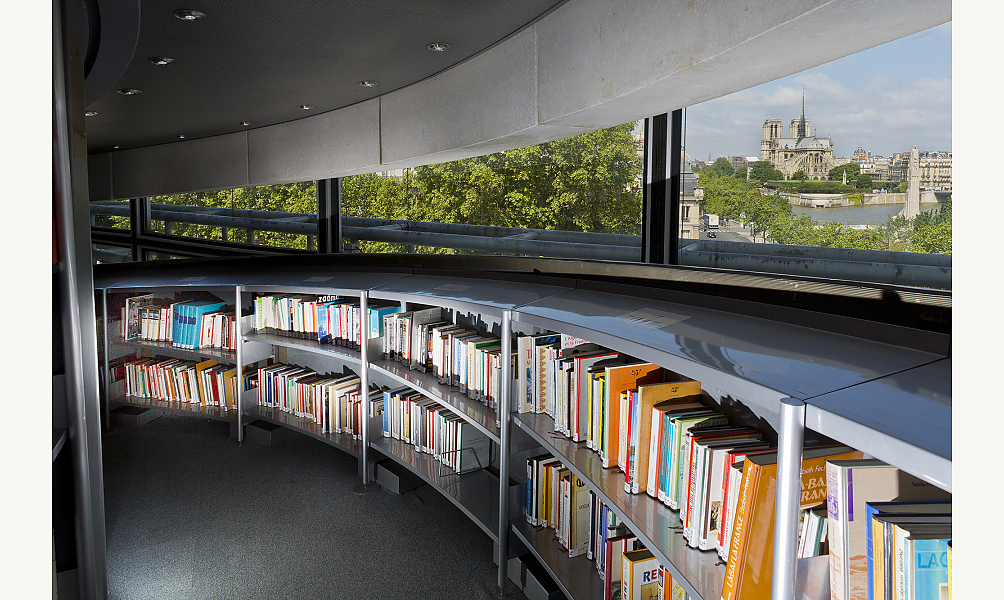 Under the forecourt, a seemingly endless forest of columns leads to the auditorium. Its repetitive nature conveys a sense of infinity. It is a purely abstract space, whose immensity evokes the Luxor Temple, and the Mosque of Cordoba, the latter being a unique emblem of Arab-Muslim architecture. The space also bears witness to the persistent geometry which governs the entire building. The exactitude and precision of each line, rigor, and redundancy give an architectural strength to the “basement”. 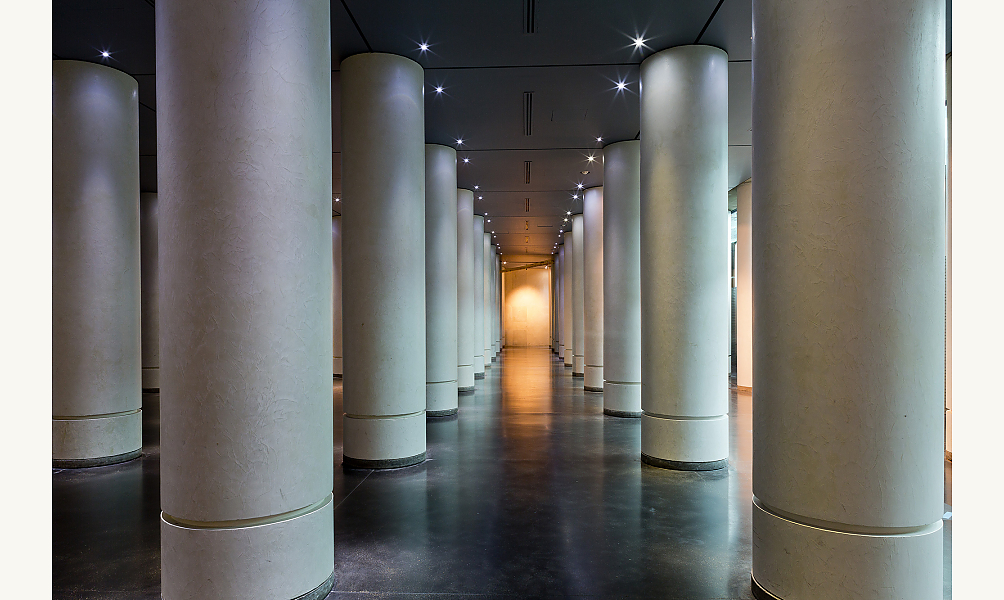 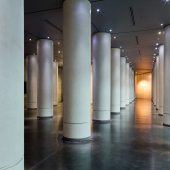